The US economy is struggling.  It has the highest inflation in 40 years.  This has affected the scratch and dent niche within the mortgage industry. Simply put, we are between a rock and a hard place for Scratch and Dent mortgage loans.  The Federal Open Market Committee (FOMC) has increased interest rates.  This has made an impact on current and future scratch and dent pricing.

As rates go up, the current loans looking for liquidation in the whole loan trading space are receiving lower prices than just two to three months ago. This occurs as desire goes down for lower coupons.  In comparison to those loans that can be originated in today’s rate environment. So, the price for a 3.25 interest rate from a few months ago fades when the current rate is high fours or low fives.

Mortgage providers might think this is a good time to sit on their unsaleable loans, scratch and dent loans, near-miss agency loans, investor fall-out loans, non-QM loans, re-performing loans, sub-performing loans and non-performing loans in hopes that interest rates will rebound and improve.

However, all signs point to even more inflation.  There are several financial outlook articles are suggesting inflation has not peaked and this environment will be around for a while. FOMC has also predicted more interest rate hikes in the future. So, mortgage lenders will have a difficult decision to make over the next several quarters. They will need to make decisions to liquidate current scratch and dent loans at a lower price.  Or risk taking an even lower price down the road. Mortgage providers find themselves between a rock and a hard place with Scratch and Dent mortgage loans in mitigating their losses with the current financial landscape in mind.

Right House Capital is here to help. RHC will give all the facts but also all the “what if’s” so your company can make the best decision for their financial outlook during this time. Contact Andrew Zale at 502-365-5632 for any pricing on any type of mortgage loan no matter flaw or performance. 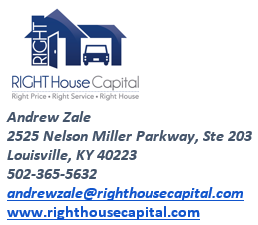